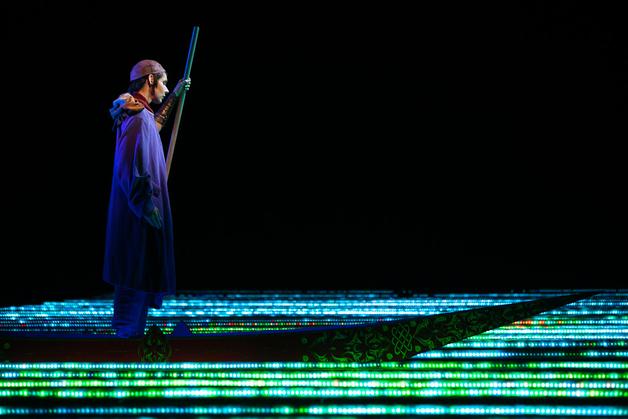 Finnish composer Kaija Saariaho’s breakthrough opera was described by the New York Times as “transfixing…a lushly beautiful score.” Commissioned by the Salzburg Festival, where it was first seen in 2000, it will now finally have its Metropolitan Opera premiere in a dazzling new production by Robert Lepage, featuring glimmering ribbons of LED lights that extend across the length of the stage and over the orchestra pit. Eric Owens is the knight on a quest of love and Susanna Phillips is his lover on the other side of the sea. Conductor Susanna Mälkki makes her Met debut.

One of the most highly praised operas of recent years, which had its premiere at the Salzburg Festival in 2000, Kaija Saariaho’s yearning medieval romance L’Amour de Loin (“Love From Afar”), has its Met premiere this season. The production is by Robert Lepage, co-produced with L’Opéra de Québec, where it premiered to acclaim last summer, in collaboration with Ex Machina. Debuting Finnish conductor Susanna Mälkki leads the performance, which stars Susanna Phillips as Clémence, Eric Owens as Jaufré, and Tamara Mumford as the Pilgrim who carries messages of love between them. Type your paragraph here.