Jeri has enjoyed critical acclaim for her portrayal of "Fantine" in LES MISERABLES and "Eva Peron" in EVITA. She is delighted her career has allowed her to work with such theater notable’s as Tony/Oscar Award winning director Jerome Robbins, Tony/Drama Desk Award winning director Trevor Nunn and Tony/Drama Desk Award winning singer/songwriter and playwright Rupert Holmes. These collaborations, and Jeri’s diverse talents, have earned praise from critics in such leading publications as The New York Times, The New York Daily News, The New Yorker Magazine, The Los Angeles Times and The San Francisco Examiner.

In addition to her Broadway roles, Jeri has had the pleasure of working in other theatrical productions such as CITY OF ANGELS, BRIGADOON, WEST SIDE STORY, PIPPIN, THE MYSTERY OF EDWIN DROOD, JOSEPH AND THE AMAZING TECHNICOLOR DREAMCOAT and PUMP BOYS AND DINETTES.

Jeri has also enjoyed performing with celebrated artists such as Bob Hope, Gregory Peck, Michael Crawford, Betty Buckley, Theodore Bikel, Bill Anderson, and John James. She has had the honor of performing for such dignitaries as President Jimmy Carter, President George W. Bush and Pope John Paul II. Through her work with the USO, Jeri has performed for both American and British troops. Other notable appearances include her rendition of the National Anthem for the Baltimore Orioles on July 4 and her debut at the Grand Ole Opry.

Jeri’s golden voice and infectiously joyful stage presence gives her a broad audience appeal. Combined with her stellar critical acclaim, this has resulted in her busy touring schedule. Jeri performs all over the United States, England, the Caribbean, Japan, the West Indies, Mexico and Canada. She has released three CDs: SWING IT LIKE SAMMY, REGARDS…JERI, and MEMORY - A Special Live Performance. Currently she is working on the completion of her fourth CD titled BROADWAY by JERI - LIVE!. 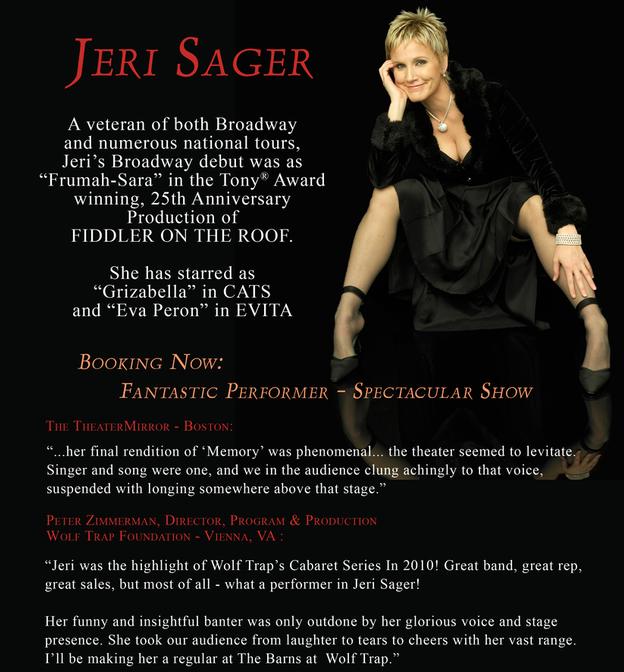 Jeri Sager is a veteran of Broadway and numerous national tours. She is best known for her portrayal of "Grizabella" in "CATS", Andrew Lloyd Webber’s Tony Award winning musical.

Jeri was 12 years old when her love of singing, and her amazing voice, were first discovered. Her first public performances were in her local church. As she grew up, Jeri’s passion for singing grew into a life long love affair.  She studied Opera (Vocal Performance) at Catholic University of America in Washington, DC. Ultimately, her profound love of performing led her to New York City. There she made her Broadway debut as "Frumah-Sara", in the Tony Award winning, 25th Anniversary Production of FIDDLER ON THE ROOF. The New York Times review of this production said "When Fruma-Sara [Jeri Sager] scurries across the stage... ‘Fiddler’ levitates." 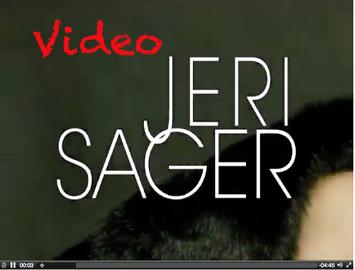 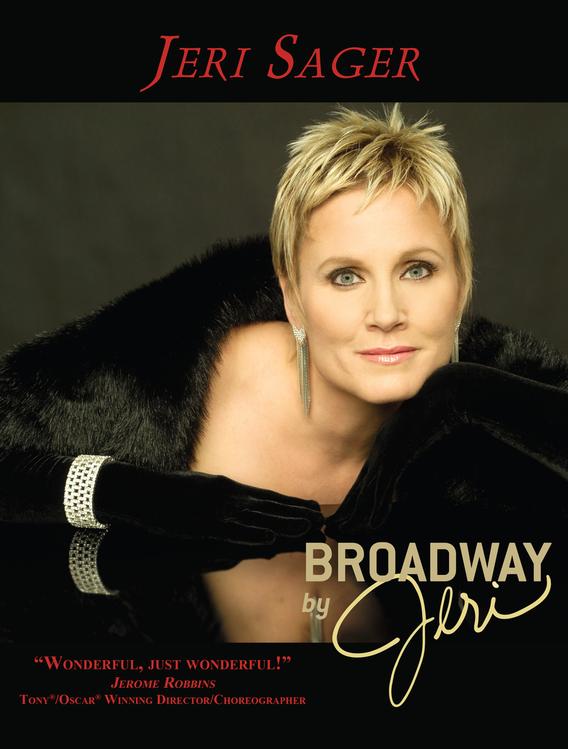